This was causing significant damage to the property and external windows.

As well as acting as both an office for the tenant’s employees and general storage, the building also welcomed large numbers of visitors for external meetings and interactive sessions. Due to the extended heatwave and mature trees growing in close proximity, the subsidence had rapidly worsened and was now starting to impact the employee’s working environment; including the use of the windows. The tenant raised concerns with MK Surveys about draughts and dampness and alerted them to urgently fix the problem and replace the windows.  To help ensure the ongoing health and safety of the tenants’ employees MK Surveys first decided to correct the underlying subsidence by strengthening the ground and re-level the building, rather than just replace the windows. This would also avoid damage to any new windows installed.

Due to both the urgency of the project and to minimise business interruption, MK Surveys called upon the expertise of Milton Keynes based ground engineering company, Mainmark, to help strengthen the ground beneath the property’s foundation and raise it back to level. Mainmark’s award-winning ground improvement solutions offer many benefits to commercial properties beyond traditional underpinning, including their speed and non-invasive qualities; saving companies both time and money.

Upon inspecting the property, the Mainmark team discovered that the lowest corner of the building had subsided by approximately 94mm and the perimeter pad foundation had rotated outwards resulting in a discrepancy of 50mm between the internal and external levels. This required considerable care and technical precision when rotating the foundation pad back to horizontal, before final lifting to ensure both the external perimeter and internal flooring were raised by equivalent amounts.

To ensure both the internal and external foundations were equally re-levelled and correction of the  rotation was achieved, Mainmark utilised two of its advanced solutions simultaneously; JOG Computer-Controlled Grouting for the main lift and re-level around the perimeter, and Teretek® resin injection for ground improvement and void filling under the internal floor slabs.

The precise degree of control offered by Mainmark’s cost effective and time efficient JOG technology enabled the substantial lift of the unit’s foundations, ensuring the integrity of the building remained intact.

Multiple injection ports were installed through the concrete foundation and structural pads along the subsided section of the building, through which the JOG high mobility cementitious grout was introduced under computer control. This enabled Mainmark to gradually and precisely lift the building in a controlled manner without causing any business interruption. The spacing and placement of the injection ports were tailored to accommodate the structural elements of the foundation, while the grout was mixed and pumped from self-contained units stationed behind the building ensuring no business interruption.

While the JOG technology raised the unit’s external walls, Mainmark’s proprietary Teretek resin injection solution was used to fill any resulting voids under the internal floor slab, thus raising the floor to level with the external walls. Teretek is unique in that it delivers both ground improvement and re-levelling in a fast, non-invasive process.

Within just seven days Mainmark raised and re-levelled the structure by 86mm, the maximum deemed appropriate without negatively impacting other factors such as the roof and internal fixtures and fittings.

The non-invasive and quick solutions offered by Mainmark allowed the landlord to replace the damaged widows within the warehouse in a quick timeframe, resulting in a satisfied tenant and a safe working environment for employees.

Stuart Dimond, Director at MK Surveys said: “As time and business interruption were our two main concerns prior to this project, we selected Mainmark to correct the underlying subsidence issue our Kiln Farm building was experiencing as they had both the skills and advanced solutions in order to get the job done in a timely manner with minimal disruption. We are delighted with the results and the feedback has been incredible. We were astonished that it took just seven days to fix the issue and ensure the ongoing health and safety of our tenants’ employees.” 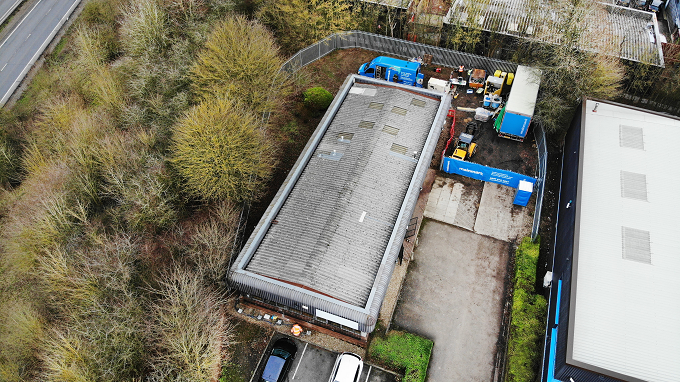