An Executive Committee manages the day to day business of the Institute and deals with any urgent issues that may arise. 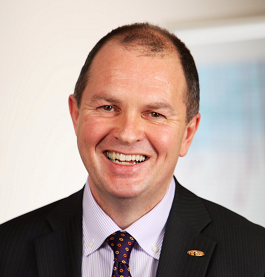 Shaun is the global Chief Ethics Officer for Crawford & Company. He is a Fellow of the Institute, a Chartered Insurance Practitioner and BCI certified Business Continuity practitioner.

As a law graduate, Shaun became a trainee adjuster in 1983 with the Thomas Howell Group, acquired by Crawford in 1996. He qualified as a Chartered Loss Adjuster in 1991 and has worked on a broad range of losses, including major and complex, before moving into Operational Management and then into business support functions, latterly in the risk, ethics and compliance arena. Shaun holds a consultative role within Crawford for losses with certain complexities.

Shaun has served on the Synergy Committee, providing advice to members on laws, regulation and market dynamics, since 2010 and became Chair of that Committee from early 2012. He is a strong advocate for the profession and is committed to maintaining high standards, especially around ethics and governance aligned to his company role.